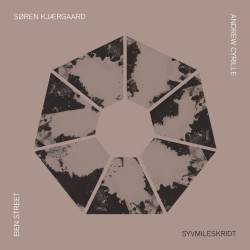 SYVMILESKRIDT – a Danish term that translates into something like “seven-mile-steps” – is the 4th album by Danish pianist Søren Kjærgaard’s cross-Atlantic trio, featuring the legendary drummer Andrew Cyrille and renowned bassist Ben Street. Where the previous album FEMKLANG (2011) looked into various nuances of silence and stillness, SYVMILESKRIDT is more an album of movement. An initial inspiration for the album was the nature of walking. How it implies both repetition and variation and how the cycles of a moving body potentially becomes a vehicle for changing states of being. Repetition becoming an intensifyer, feet becoming miles, steps becoming giant, looping becoming leaping.

This interplay between forms of repetition laid out in a dynamic continuity is in many ways the ground from which SYVMILESKRIDT leaps off. The music which is primarily written by Kjærgaard explores this ground by converging composition and improvisation into an open sonic field with room for each individual voice to unfold. To evoke both the looping and varying nature of SYVMILESKRIDT, the album begins and ends with two different versions of the composition Cyrillic Circle, in the same cyrillic pulse so to speak, and yet differently.