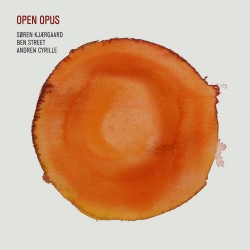 As with ”Optics”, ”Open Opus” was recorded at the renowned Sear Sound studios in New York City under the auspices of sound engineer James Farber. With only one year between the two sessions, the albums are in many ways interrelated, sonically and aesthetically. As the album title suggests, a ground element of ”Open Opus” is openness: not only to exploring new sonic fields but also to the interweaving of the generations and traditions. (When recording, Cyrille, of Montclair, New Jersey, was 68; Street, of Brooklyn, New York, was 43; Kjærgaard, of Copenhagen, Denmark, was 30.)

The compositions, which except for two group improvisations were written by Kjærgaard, create an atmosphere, a musical state of being, with room for each individual voice to unfold. Accordingly, and preserving a kind of freshness and spontaneity in the music, most of ”Open Opus” was done in first takes. Throughout ”Open Opus” are textures of transparency and density, of airiness and water-like buoyancy – a meeting of three musicians in vibrant interplay, sharing a deep involvement with the expanse of sound.