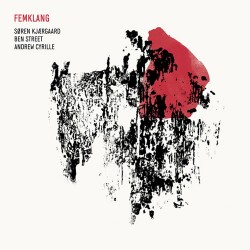 Featuring the Danish pianist and rising talent, Søren Kjærgaard, iconic drummer Andrew Cyrille and renowned bassist Ben Street, thiscross-generational trio has been hailed by international critics for their two releases Optics (ILK140CD, 2008) and Open Opus (ILK166CD,2010). Highlighting the compositional voice of Søren Kjærgaard, the three musicians challenge the traditional trio format, and their efforts inbreaking new musical grounds has brought them to the stages of festivals and venues in Denmark, Spain, Italy, Canada and the US.

The third and present album Femklang is a work relying on its slow unraveling pulse to evoke a suspended, weightless sound world. Byopening and closing with The Loop – a drum cycle penned by Andrew Cyrille – Femklang suggests an overall circular feel to the music; therepetitive becomes a way of looking into the various shades of a single entity, a note, say, a chord or a cymbal stroke.The music which is primarily written by Kjærgaard explores sound and silence on equal terms, as two inseparable aspects, convergingcomposition and improvisation into an open sonic field with room for each individual voice to unfold.

Femklang was recorded at the legendary Avatar Studios in New York under the auspices of sound engineer James Farber who had thethree musicians placed in one room in order to create a naturally resonating ambience. Both the sound aesthetic and the musical groundis in many ways a continuation of the two previous trio albums, and also draws a line to Kjærgaard’s duo collaboration with the poet, artist,philosopher and former tennis pro Torben Ulrich on their two releases Suddenly, Sound (ILK155CD) and Alphabet, Peaceful, Diminished(ILK167CD).

Femklang is released on cd in limited edition and will also be available for download on iTunes and at other digital music vendors.
The Danish word ‘femklang’ contains a variety of meanings. Femklang is put together by the two words fem, meaning five, and klang (asin German) meaning timbre or sound, according to both the sheer physicality of a sound and the individual perception of that sound: Howone hears it, aesthetically, emotionally, cognitively.In music theory, klang can refer to a group of notes, like a chord or a cluster, which also points out the most frequent use of femklang inDanish, meaning five-chord or pentachord, also suggesting five-foldedness as such.