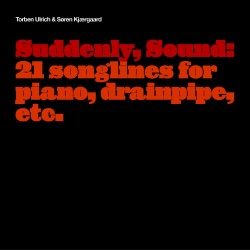 Suddenly, Sound: 21 songlines for piano, drainpipe, etc.
In the summer of 2006 Søren Kjærgaard, who at the time was on a U.S. tour, met Torben Ulrich in Seattle. That night a contact and mutual friendship was established, and during a number of cross-Atlantic phone calls, ”Suddenly, Sound” started taking its form.
The following summer (June 2007) Kjærgaard returned to Seattle to visit Ulrich and to begin recording their duo project in a local studio.
Ulrich had written a cycle of twenty-one songlines for the occasion, and these lines (based on a narrative of ten rootlines) were the departure point for the recording sessions.

The music was not pre-composed, but took shape as a sequence of improvisations in a minimalistic dialogue with Ulrich’s voice and words.
The songlines also were timed and woven into the music, with both participants listening closely to each other. In other words, Ulrich did not recite the songlines as given or frozen texts from the printed paper, but played with words and syntactic structures in conversation with the music, as a sort of improvised form where words or phrases may be repeated, shuffled around or left out.
Dealing with dynamics of the five elements (earth, water, fire, air, space), the rootlines took the form of two imaginary practice sessions under the direction of G.I. Gurdjieff, the Armenian philosopher.

On the album, the full title of which reads, ”Suddenly, Sound: 21 songlines for piano, drainpipe, etc.”, one will hear Kjærgaard on an old grand piano, played both conventionally and prepared, to extract a wide spectrum of sounds from the strings. Kjærgaard also plays on a variety of electric and acoustic keyboard instruments, including Farfisa organ, Wurlitzer, Fender Rhodes, Mellotron and toy piano.
Ulrich is also heard on the interior of the grand piano and on non-traditional instruments such as drainpipe, plunger mute, marbles, grip strengthener, Chinese steel balls, jar of dice, and ceramic and lacquer bowls.

“Suddenly, Sound: 21 songlines for piano, drainpipe, etc.” is released digitally on iTunes and physically on CD and vinyl accompanied by a booklet containing the ten rootlines and twenty-one songlines in print. Furthermore one will find linernotes written by the Danish jazz critic and radio producer Ib Skovgaard and the Danish author Lars Movin, who each from his own angle describes the works of the two artists, their story and their meeting.

Torben Ulrich (born Oct. 4, 1928) is one the most colourful and longest active personalities in Danish culture of the 20th-21st centuries, known as a poet, radio and newspaper journalist, painter, filmmaker and tennis player – all carried out with a striking originality. His lifelong work and wide-ranging studies of movement and spiritual disciplines (athletics, dance, yoga, Buddhism, Sufism, etc.) has placed him as a notable thinker.
He is also well-known as an internationally touring tennis player, traveling all continents and participating over four decades at Grand Slam events (Wimbledon; U.S., French and Australian Opens). As a senior on the Grand Masters tour, he was ranked No. 1 in the world in 1976.