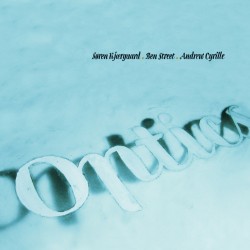 Optics is the debut release by Søren Kjærgaard’s trio. The project had matured in his mind for several years and marked a turning point in his career. Up until this time, he had performed and collaborated internationally with artists like Tim Berne, Herb Robertson and Michael Blake, but this date was his first international recording as a leader.

The trio features drummer Andrew Cyrille and bass player Ben Street.
Cyrille is a living legend and one of the true masters of improvised music. He has collaborated closely with artists like Cecil Taylor, Oliver Lake and Walt Dickerson in some of the ground breaking projects from the 60’s up untill the present day.
Ben Street is regarded as one of the most sofisticated upright bass players on the present scene, effortlessly encompassing raw power, elegance and a singing tone. Coming from New York he performs and records with artists like Kurt Rosenwinkel, Danilo Perez and Paul Motian.

The result is a three dimensional sound that brings out all the subtle shades of sonorities. It takes the listener into the room, creating a surging atmosphere throughout the set from the first to the last note. An atmosphere of vibrance and space. Of electrically charged silences and the awakening sense of exploring new musical landscapes. The three musicians had only met once prior to the date and yet there is a natural and organic flow in the music as most of the record was done in first takes.