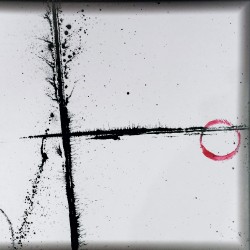 Meridiana: Lines Toward A Non-local Alchemy

The Meridiana project started out in the spring of 2011, at the Meridian Gallery in San Francisco, during SK’s artist residency there. In the following years TU and SK worked together on the project, that looks into the interplay of lines, sonically, textually and graphically, inspired by the different meanings and usages of meridians in Eastern (Daoist-alchemical) and Western (geo-navigational) traditions.

The project is now released as 300 copy limited edition double vinyl, with unique art work by SK and TU, and also includes a booklet of liner notes and texts.

From those 21-pages of liner notes, an extraction reads:

“Still, here we are, inside two LPs, with what we have called four approaches, four sides of vinyl, four voices, a string quartet, four times three, the twelve meridians, sometimes called postnatal or acquired or tidal; four times two, the eight meridians named extraordinary or congenital; the two of us, in what David Bohm has called the explicate and implicate orders; … Four approaches, four sides of vinyl.

Approaches will refer to process, play, passage, part, piece. Compositionally, musically, maybe a little different from the traditional word “movement” pointing to a tempo, andante, largo, presto, since we’re not doing symphony. Maybe it’s closer to a suite in the sense that it was conceived as a sequence, first side before the third (on our previous recordings the order would not have been that orderly). The sides are definitely related, linked, the lines run through, but more in the sense of four possibilities out of a manifold: when we went into the studio, we had no idea, no grip on, what we would end up with (if anything).”