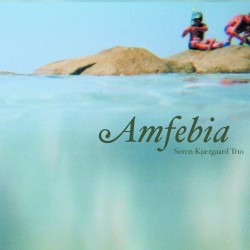 The double release Amfebia and Akustika was SK’s recording debut as a leader. The two albums feature his former trio with drummer Frands Rifbjerg and bassist Jonas Westergaard with whom he played intensively in the years 2003 to 2007 until forming the trans-Atlantic trio with drummer Andrew Cyrille and bassist Ben Street in 2007.
These two early trio recordings are charged with youthful vigour and excitement, and the trio was a creative nest for the trio concepts that later on were to be further developed with Andrew Cyrille and Ben Street.