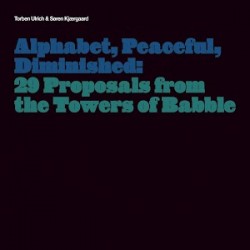 Alphabet, Peaceful, Diminished: 29 Proposals from the Towers of Babble

It don’t mean a thing,
and it ain’t got that swing

This slight change in a well-known line describes the launching point for “Alphabet, Peaceful, Diminished: 29 Proposals from the Towers of Babble”, the new release from Torben Ulrich & Søren Kjærgaard. On their 2009 album “Suddenly, Sound: 21 songlines for piano, drainpipe, etc.” and subsequent tour, the Danish pair worked with the five sonic elements: sound, line, pulse, silence and space — along with suddenness, inspired by the Armenian teacher Gurdjieff’s way of shouting things to a sudden halt, stopping one’s habitual train of motion, its freezing as well as its subsequent freeing up.
“Alphabet, Peaceful, Diminished”, recorded in January 2010 near Seattle, US, is in many ways a continuation of this practice, but in a more radicalized form, converging the two fields of asemic and atonal play, with regards to Arnold Schoenberg, Yusef Lateef, Kurt Schwitters and the dadaists.

The ground material is a set of 29 alphabet rows and 29 tone rows, extracted from the 29-letter Danish alphabet and the well-tempered 12-tone system. In both the vocal and tonal approach, there is talk of a diminished aspect, a diminishing of tonality and linguistic comprehensibility: where Babel becomes babble, meaning missing meaning, and where the atonal approach opens for new melodies and chordal textures.
The proposals are a way of intertwining both an improvisational and compositional approach into one state of being, musically, by decaying the directive aspect in scored music, and yet having something in writing to embark from.
On the album we hear the voice of TU exploring the alphabetic sonorities in interplay with SK, who had two grand pianos at hand in the studio, lined up to be played simultaneously: one conventionally tuned (a well-tempered clavier) and one completely prepared. Instrumentally, the proposals vary from being only piano and voice, the starting point of the album, to multiple layers of pianos, keys, voices etc.

The peaceful approach of the album is explained in the liner notes:

“After the word alphabet comes peaceful. It means peaceful, not in the sense of being the other side of war, the opposite of war, war and peace, two states of being, two ways of relating, of having that choice, even reluctantly. Here peaceful means more something like peacefulness as such, an aspiration, ongoingly, toward a zero state of violence, not abandoning fire, intensity, the explosive.”

Torben Ulrich (born Oct. 4, 1928) is one the most colourful and longest active personalities in Danish culture of the 20th-21st centuries, known as a poet, radio and newspaper journalist, painter, filmmaker and tennis player – all carried out with a striking originality. His lifelong work and wideranging studies of movement and spiritual disciplines (athletics, dance, yoga, Buddhism, Sufism, etc.) has placed him as a notable thinker. He is also well-known as an internationally touring tennis player, traveling all continents and participating over four decades at Grand Slam events (Wimbledon; U.S., French and Australian Opens). As a senior on the Grand Masters tour, he was ranked No. 1 in the world in 1976.